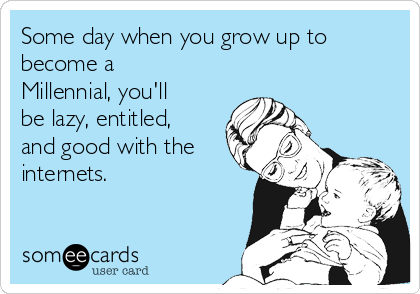 Those gosh darn millennials, amiright?  We all know that it’s been said about every past generation since the beginning of recorded history, but millennials are just the worst!  They’re all so entitled, lazy, and they’re killers of industry.  And the worst part, like a swarm of cicada’s, they are coming.  And they’re taking over, too.  They’re making up an increasingly larger percentage of the workforce, and they’re starting to run for office.  They’re our doctors, lawyers, police officers.  So are we all doomed?

We’ve talked on here before about the millennial generation, even going so far as to ask if “millennial” is actually a thing.  And, while millennials aren’t a whole new species, they do exist as a particular age demographic; a demographic that has grown up during an unprecedented dynamic period of technological development.  Over the next five years, the millennial generation is going to represent an overwhelming majority in the workforce, and they’ll also start to represent a greater number of public service jobs such as city councilmen, congressmen and senators.  So why are so many associations operating like they don’t exist?

1: Millennials have no employer loyalty – The idea is that companies will put in time and money into training a new employee in the millennial generation, only for them to get board and move on, or take a better offer elsewhere.  This has been used as a justification for larger companies and older association’s to not higher millennials.  Why sink resources in someone who isn’t going to stick around?  The problem with this thinking is, according to pew research, millennials are actually more likely to stay with their employers longer than older generations.  If you want loyalty, it seems, higher a millennial.

2: Millennials don’t understand finance – Blame it on the avocado bread if you will, but if there’s one thing you know for sure, it’s that millennials don’t know how to save.  Accept they do: a majority know how much they will need to retire, and when it comes to actually saving for it, they are ahead of their boomer predecessors.

3: Corporations don’t need ’em, millennials need them – This is one of the more deadly false assumptions aging associations make.  They assume that the corporate structure works the same as it did a couple of decades ago, and it just doesn’t.  With over 99.7% of all businesses being small businesses, Millennials have more options than any other generation.

4: Millennials don’t value education – They’d rather get their information from Google, or Facebook than reading an actual book.  And thanks to the philosophies of people like Mike Rowe, many millennials aren’t even going for a four year degree.  There is some truth to the assertion that people in general have a wider viaraity to consume information, but that doesn’t mean formal education is out.  In fact, more millennials than ever are going on to university and leaving with degrees than any past generation, and millennial women are 4 times as likely to graduate college than boomers.

5: Millennials are just plain lazy – This one is undeniable.  Millennials wouldn’t know a hard days work if it bit them in the behind.  This might be the most misleading rumor of them all.  According to CEB, millennials are among the most competitive employees in the labor market.  Moreover, they are also more likely to have multiple sources of income, and be involved in community activities than their boomer predecessors.

Look, we get it.  The new generation is asking for a lot of change when it comes to technology, and a lot of that change is pretty off putting to your current, loyal member base.  Why cater to those who are new to your association over those who have been loyal for years?  Because no generation lasts forever.  The endurance of a legacy can directly be measured by its willingness to flex to the needs of the future.  Do you want your association to be remembered as a dinosaur: great and fearce, but extinct?  Or, do you want to carry the torch onward, lighting the way for the next generation?  The only way to do that is to be a part of it.